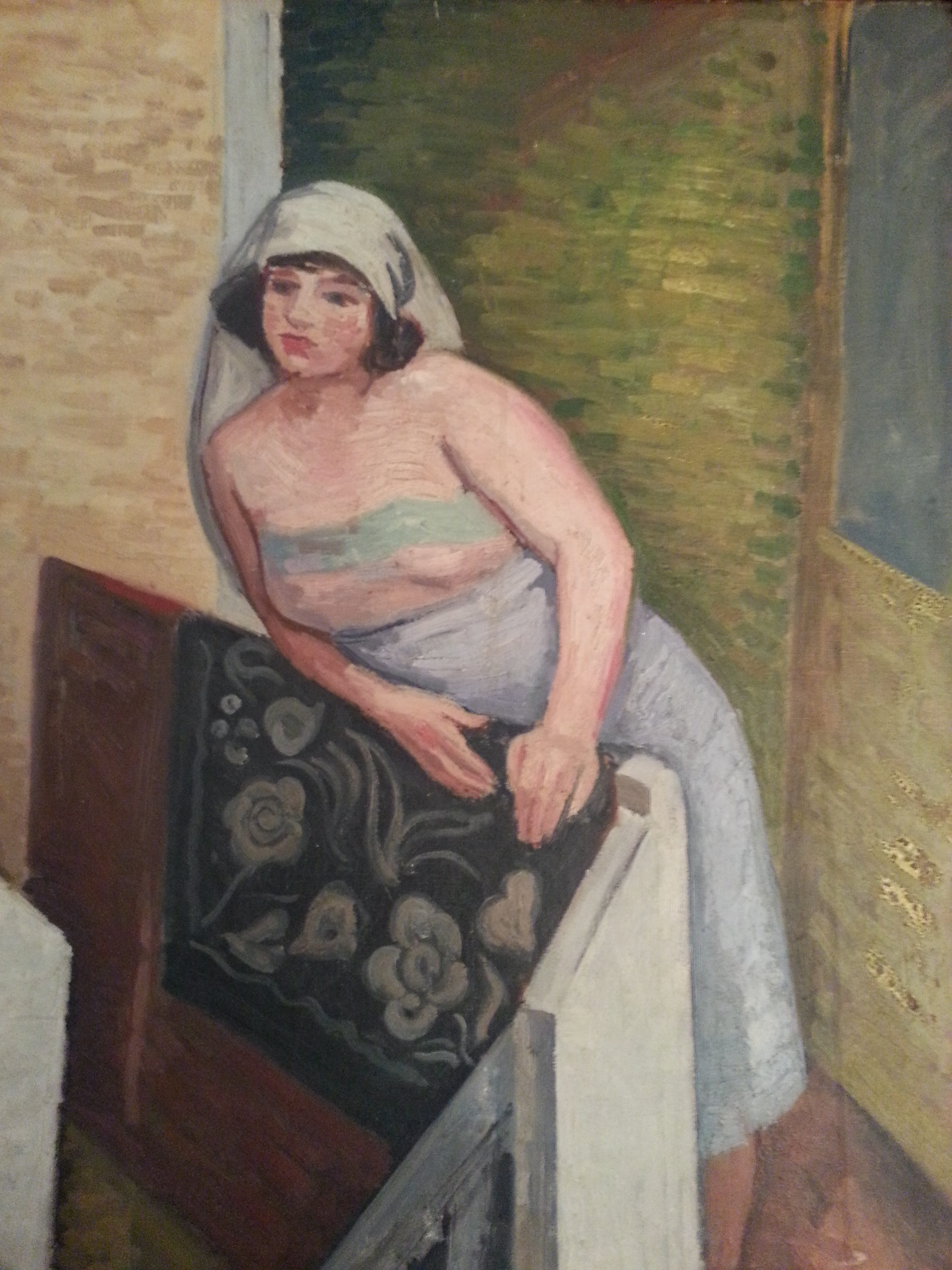 Photographe of the Work:

"For the most part, they are painted with the same love, the same tender care, whether it be a little girl, a woman or an old woman. There is the essence of the art of M. Jean Marchand, an art of emotion, intimacy, and interior attraction. The painting of this artist gently communicates the collected sentimentality which is his; It does not impose itself with a crash, but it is one of those in which new qualities appear every day to reveal themselves. His paintings count among those whom one loves more and more and better as one looks at them and mixes them with one's own life" 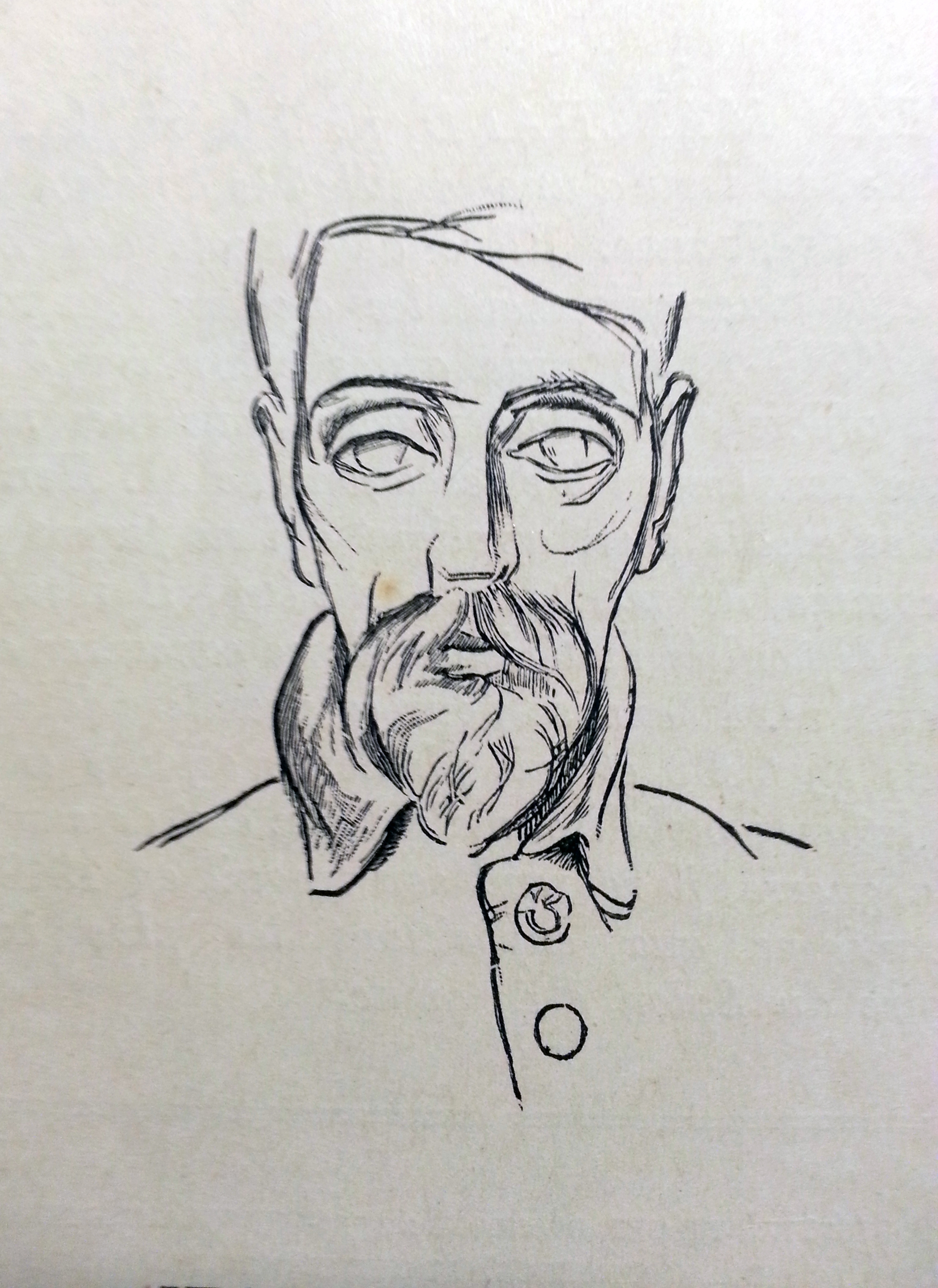 He was born in Paris on November 22, 1883. His family is totally opposed to his passion. At the age of 18, he left to try this adventure alone.

From 1902 to 1906, he studied at the École des Beaux-Arts in the workshops of Léon Bonnat and Luc-Olivier Merson. At the same time, he must work to support himself. Its material situation is precarious and will remain so for many years. His love for painting seems unfailing. René Marchand writes: "It is no exaggeration to say, for him, he braved his family, endured sorrows, hungered." One day, at the Academy of Vitti, M. Henry Guillaume Martin was astonished to see him painted on a towel nailed to a frame.

In 1908, he exhibited for the first time at the Salon des Indépendants

After unsuccessful attempts at applied art he devoted himself entirely to painting.

In 1910, he exhibited simultaneously in Paris (Salon des Indépendants, Gold Section) and in London.

It will notably be noticed by Roger Fry and Clive Bell, advisors of the famous Grafton Gallery. At the time his art is close to postimpressionism (Still life, landscapes, etc.).

The British collector Samuel Courtauld (1876-1947) acquired some of his paintings. The young painter then approached members of the Bloomsbury Group.

He will be part of the small group of French who will join this movement. Among these French painters are: Simon Bussy, Henri Gaudier-Brzeska or Henri Lucien Doucet.

Around 1912 he experimented with Cubism. It will sometimes make multiple futuristic images. After this short period, he moved towards a vigorous naturalist style that can be likened to that of Derain.

Before the war he made several visits to Russia and England.

In 1914 he was mobilized. The poor state of health of Jean Hippolyte Marchand obliges him to remain in the auxiliary services. He is in turn conveyor, man of chores, photographer. He makes some drawings and watercolors. During his mission to La Palisse, he executed some marines. Two of these marines are preserved in the War Museum: "The American sailboats" and "The submarines".

In 1918, after the demobilization he settled in the Yvelines, near Paris where he painted landscapes. He composed the large panel entitled "Le Soir" which will be presented at the Salon d'Automne in 1919.

In 1919, part of her work was exhibited in London in a collective exhibition at the Carfax Gallery. On this occasion Clive Bell wrote: "No living painter is no longer interested only in the creation of form and the emotional significance of shapes and colors that Marchand"

In the 1920s, Jean Marchand's work significantly influenced the aesthetic theories promoted by Clive Bell and Roger Fry. Roger Fry included an essay on Marchand in his very influential vision and design published in 1920.

In 1925, he separated from his wife, the artist Sonia Lewitska

In 1928, Jean Marchand left for Syria. He will, for example, make great decorations for the "Jeu des Pigeons" in Damascus. He also painted the murals of the Beirut Residence. During his stay he will also make scenes of religious morals such as "Dervishes turners" or even "Kaderiyehs"

In 1930 he was exhibited at the Galerie Georges Giroux in Brussels.

He had a posthumous exhibition at the Redfern Gallery in London in 1955, followed by retrospectives in Paris, Basel, Milan, Rome in 1956 and at the Galerie del Cavallino in Venice in 1957.

Some Paintings by Jean Hippolyte MARCHAND 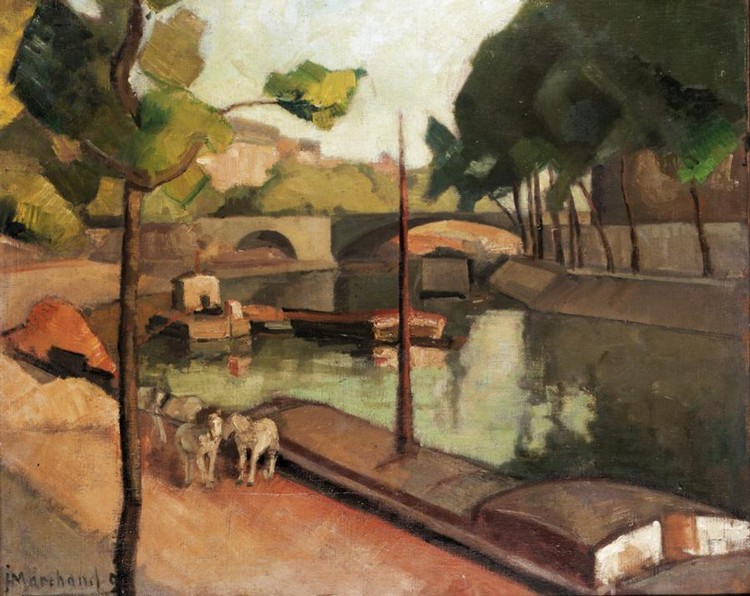 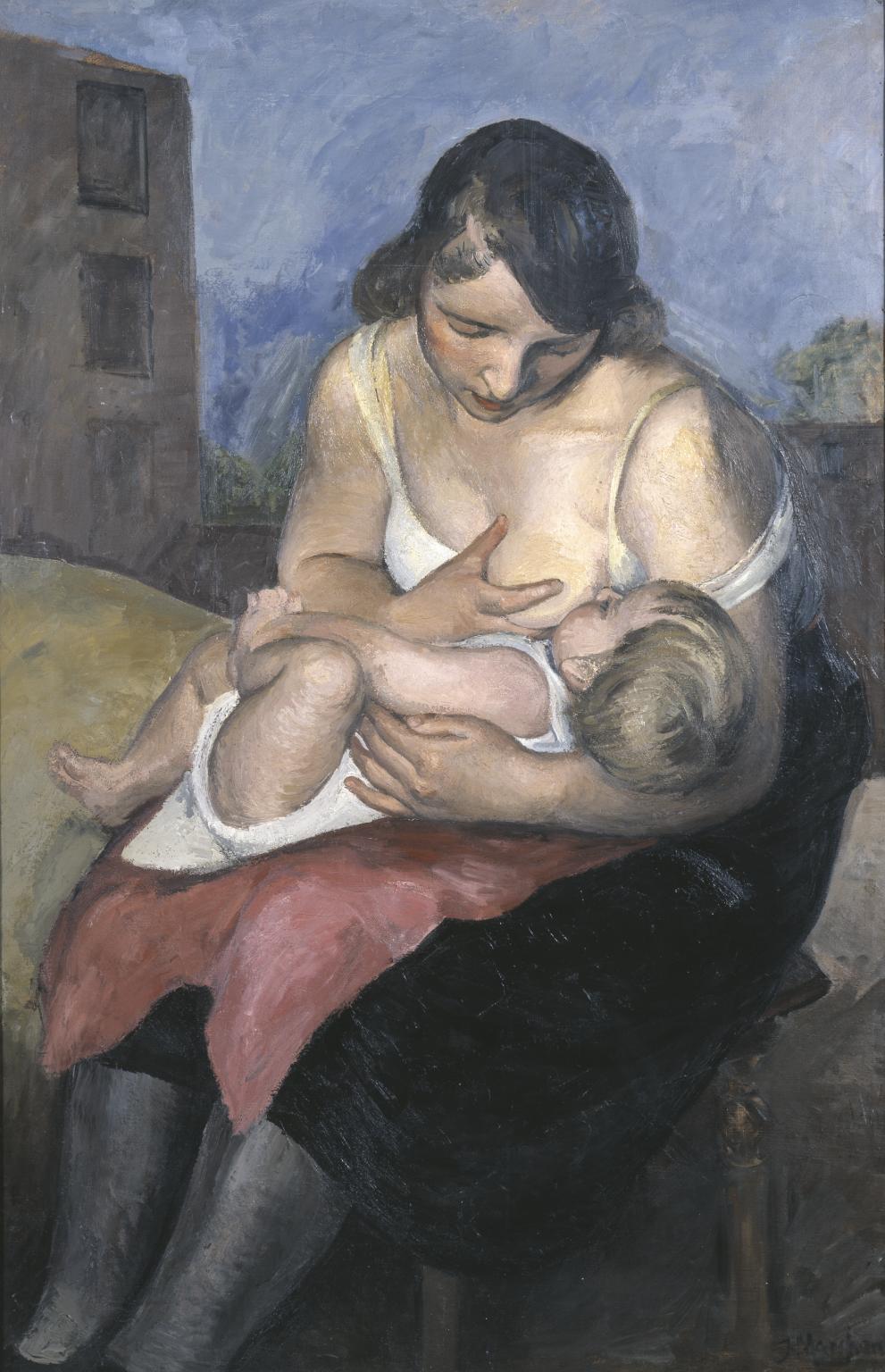 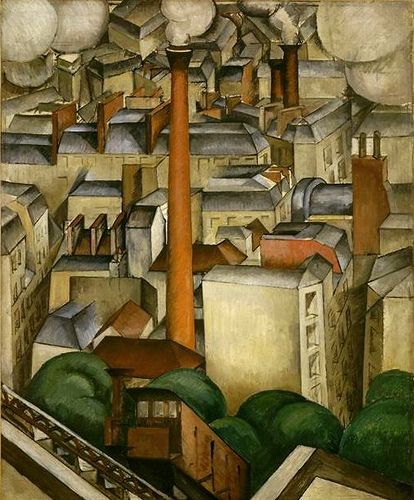 « Funicular of Montmartre », Museum of Modern Art of the City of Paris

"Some people regard painting as an obscure problem that is constantly complicated by new formulas. I do not think that the truth is more in the formulas of yesterday than in that of the day after tomorrow; it is situated in a top plane. It matter first of all to provoke, in the sensitive spectator, that impulse which takes him beyond the visual aspect of things, into a more solemn and deeper reality which makes painting a transfiguration of objects the most trivial."

Jean Hippolyte MARCHAND and the Critique

"Merchant is a modest. In an assembly of painters he avoids declaiming theories; He is the last to speak, yet he must be compelled to do so. Then he said things very reasonable, in a very soft voice. It is an admirable spectacle that the arrival of Marchand to the Independents. He unloads his canvases from an old fiacre at a gallery that seems to be preserved for him; at the wicket he claims his serial number, as a timid freelancer would ask for a third soldier for Amiens.

But Marchand's talent is less modest than himself. Her paintings are those that give pride of place to a Salon where young people do the lesson. One hesitates a little to place them; Is it necessary to lodge Marchand among the fauves of yesterday or the cubists of tomorrow? It is usually installed not far from André Lhote. But tomorrow these two artists, well classified, will find themselves singularly distant from one another. "

"La Suzanne, by Marchand, is one of the best consignments of the Salon. (...) It is a very sincere poetry made of chastity and nobility that breathe these beautiful nudes expressed with plenitude. "

"With fairly weak means, a craft lacking in skill and even a certain poverty in execution, this artist arrives at results that impose on us. That is what a man's honesty and conscience can do. A tree is a tree; it is not a stain that walks like a witch's broom. A road is the good hard ground on which you walk. Mr. Marchand's landscapes tell you that. They are well in depth and in perspective, well in their plans, with their lights that make them vibrate. "

"M. Marchand is one of the hopes of the young school, and provokes an admiring expectation around him. He has adjoined Cubism in the manner of those who looked at Cezanne and Poussin; It remained classic and of a pure but traditional design that seeks the nobility of the line. The danger of appearing thus images of life, elevated by style to a superior meaning, is to imprint his picture with a little coldness. M. Marchand does not quite escape it; But it comes to style; His painting "Le Soir", with its beautiful sky and the almost hieratic stature of its rider, is a good picture. "

"It is French, it is classic; It is not he who, under pretense of contempt, will avoid the description, he pursues it "to the limits behind the attenible. The purpose of the world is the development of the mind, Renan said. Jean Marchand is careful not to forget that it is important in art to express above all that force of impetus which raises nature towards the imperceptible hole of the pertuis that leads to another heaven. And this is the meaning of the noble cadences, the subtle harmonies of colors, disdained by the true common, Jean Marchand gives to the exalting realities of life. The drawing is bold, but avowed by the painter without declamation. His honest and sincere work is of a rare and disciplined distinction, and it is not without effort that the artist succeeded in realizing in himself the powerful simplicity of the masters. Easy artifacts of the palette and pencil.

But a severity, a haughty, harmonious charm, emerges from the definitive works. At the price of what anxieties, what doubts, what pains! "

Jean Marchand's paintings are in public collections throughout the world:

- "Still Life with Fruit and Candlestick", oil on canvas, 1920, The Courtauld Institute of Art, London, England

- "The Park at Versailles", drawing, The Fitzwilliam Museum, Cambridge, England

- "Funicular of Montmartre", oil on canvas, Museum of Modern Art of the City of Paris (MAM), France

- "Railroad in Russia", oil on canvas, Museum of Modern Art of the City of Paris (MAM), France

- "The beautiful Georgian", oil on canvas, Museum of Modern Art of the City of Paris (MAM), Paris, France

- Saint-François of ASSISE | The Song of the Sun | With wood engraved by Jean Marchand | Rouart, the Catholic Art, 1918

- Henry MALHERBE | The Last Judgment | With wood engraved by Jean Marchand | Editions of the Siren, 1920