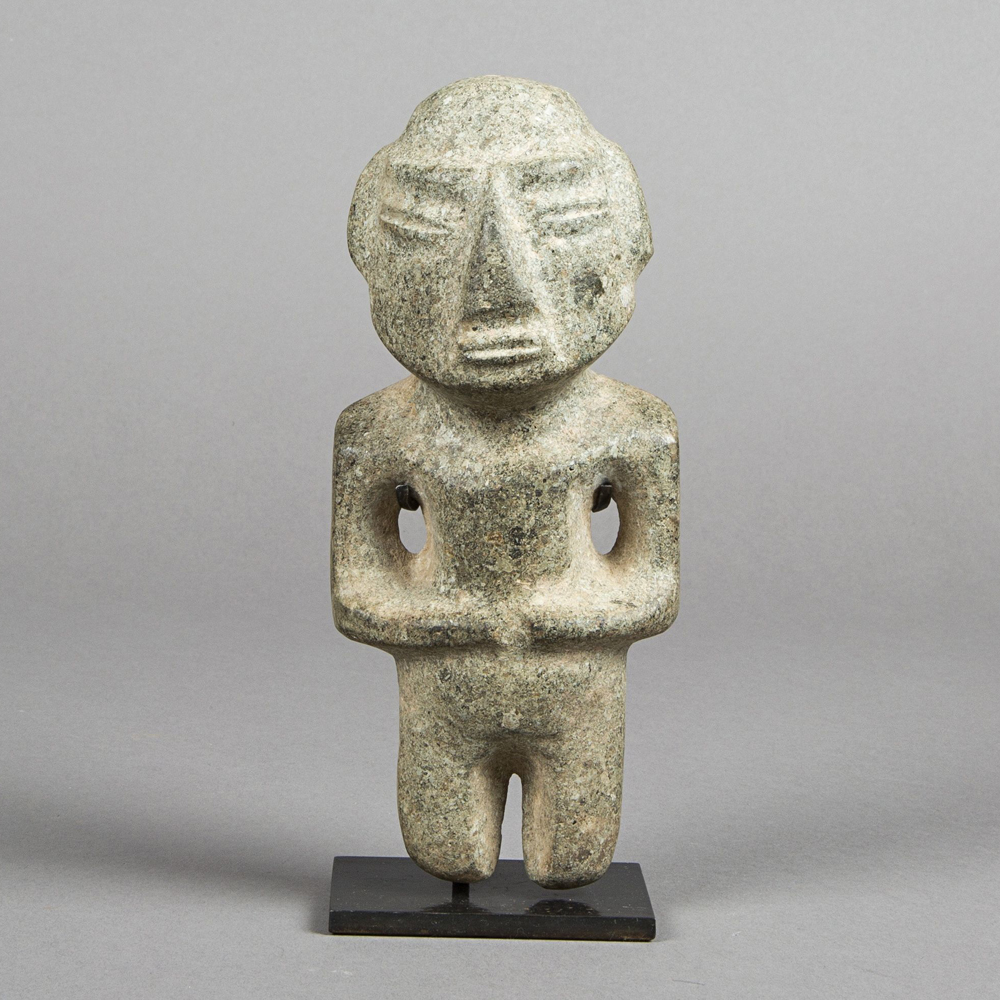 Statuette in gray-green diorite with a matte patina surface. Great character with perforated arms, hands brought on the belly. Small vertical notch to separate the legs; oval head shape, facial features highlighted in light relief. The round top of the skull is finely polished . Very good state of preservation.

In 2011, an expertise has been conducted by Mr. Jacques Blazy His expertise confirms the authenticity of this statuette. He is the specialist of the Guerrero statuary: Mezcala and Chontal. He is a world-renowned expert in this specific area. This is the best guarantee for this type of prehistoric statuette. In 2016, we can note that a second examination has been carried out by Bénédicte Hamard. The expertise was conduct without knowledge of the first one. It confirms of course the authenticity of this piece. 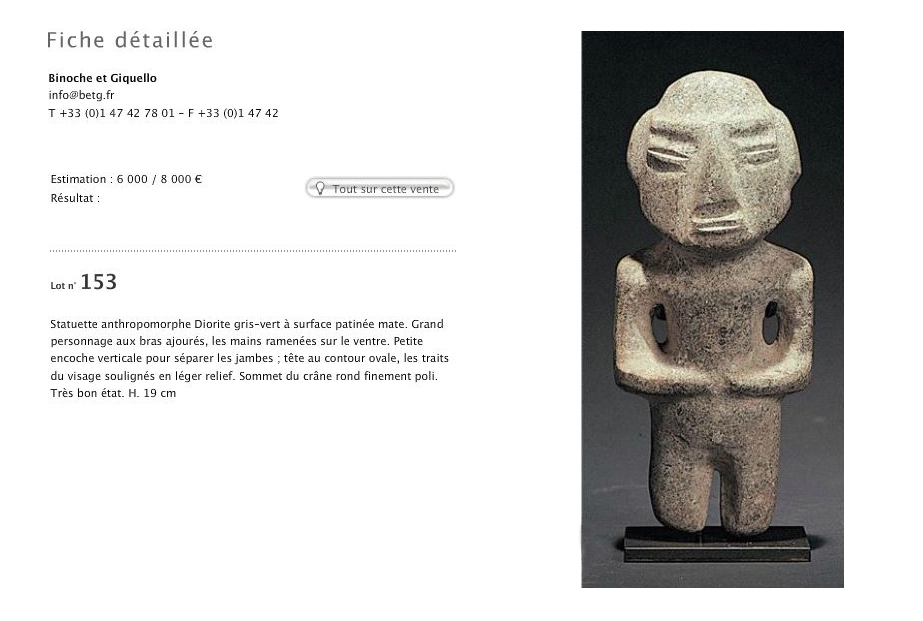 The auction house Binoche et Giquello is an European reference for the sales of archaeological objects from South America. These include, for example, organizing the sale of the prestigious collection of art from Guerrero H LAW (21 March 2011 Expert: Mezcala expertise - Jacques Blazy) 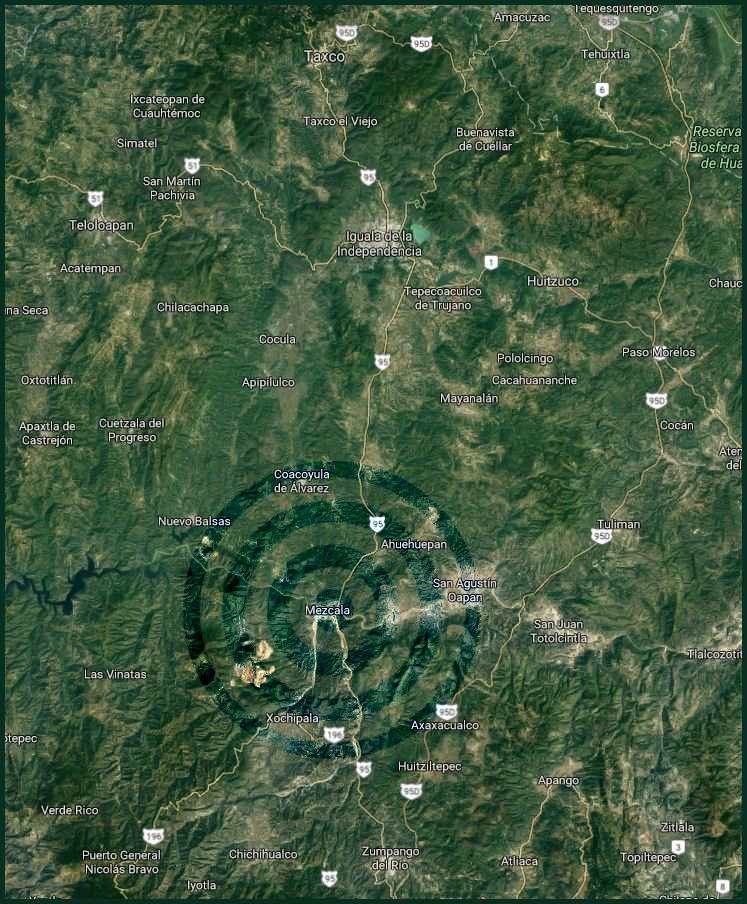 The Guerrero is a state in Mexico. It stretches from the city of Taxco in the north to the famous bay of Acapulco on the Pacific South. It is bordered by the states of Michoacán, west, and Oaxaca to the east. It is a mountainous country crossed by the Sierra Madre del Sur. Several peaks are over 3000 meters, as the Cerro Teoptepec which rises to 3705 m. The climate is tropical.

The Chontal and Mezcala Statuary

Statuettes of the state of Guerrero are testimonies of the prehistoric America. Some agree that they could have been created by the earliest civilization to all other pre-Columbian civilizations. It seems possible to say today that the Mezcala and Chontal tradition marks the beginning of the stone work in Mexico. Although these cultures are probably born from the same roots as the ancient Olmec, their isolation in an area difficult to access has led to an independent development from neighboring influences.

Most Mezcala and Chontal objects are derived from boulders. They are carved from colored hard stone : green, gray-green, gray and black (diorite, jade, etc.). They come from the bed of the deep canyons of the region. They are shaped with horizontal slits, diagonal, vertical, holes or martellements. There are different types of representation: characters, animals (jaguar, frog, monkey or squirrel) or facades of temples with columns. The lithic production Mexcala and Chontal is estimated at about 20 000 pieces. There are few books on the subject. The work of Carlo Gay based on stylistic analysis is always a references on the subject. He developed a classification of Mezcala and Chontal sculptures. They are classified according to their forms of reference M 2 (easiest) to M 26 (most complex). Here it would be the M 14 type according to Bénédicte Hamard. According to Carlo Gay, the Chontal culture differs from the Mezcala Guerrero culture and by its greater realism. Abstract bill would oldest objects but this remains a hypothesis, the work of Carlo Gay remains controversial.

The spare style of this statuary is often described in the West as resolutely modern and aesthetic. It, along with the Cycladic sculpture, has inspired the first Cubist and abstract artists. However limiting these sculptures to their simple appearance would be misunderstanding prehistoric cultures, especially American prehistoric cultures. They were not looking to make a piece of art in the modern sense but to create an object that we would call today "magic". The hardness of the rocks used allows us to affirm that the time allotted to the ritual of modeling and polishing surfaces of these statuettes were extremely long.

They are funerary statuettes. They are mainly found in the tombs located under the floor of the dwelling huts. They were buried with the dead, either individually or in small groups of a few units. Deposits, such as those that can be seen on the present statuette are the consequence of this environment. This is one of the elements that permit to distinguish a real object from a fake. These sacred entities have a role which is still poorly defined. It is possible that the sacred origin of these statues come from the worship of the ax, essential object to early man. One might think that an extension of his first magical dimension was given to it in modeling it in an anthropomorphic form. They were to have a role in the passage into the afterlife or in the afterlife.

Archaeological excavations have shown that more than 1200 years later the Aztecs have excavated some of these statuettes and treated them as sacred objects.

A time of « universal sacredness »

To understand the essence of prehistoric statues, it is essential to try to project ourselves into a world of "universal sacredness." Today, in our civilizations qualified as modern, there are almost no terrestrial elements associated to the sacred, with the exception of a few monuments or objects. The number of sacred items decreased drastically over time. In a sense, the “evolved” world undergoes a sort of "progressive desecration”. Its origin, the "first desecration," the day when a man gets rid of an element from the sacred All, remains unknown. It is a vital missing link in the history of humanity that should be studied carefully. It's hard to explain its genesis; the essence of the sacred having a priori no contradictions with science or progress. It may be assumed that there was a world of "universal sacredness" which was followed by a world of "partial sacredness." Prehistoric sculpture invites us to look and question us on this world so diametrically opposed from our so-called advanced civilizations. The "universal sacredness" governs all primitive cultures including those of prehistoric America. The "universal sacredness" is the essence of the original man.

Although this concept is difficult to grasp, it is essential. At the time of the making of these sculptures everything was sacred: animals, plants, tools, pottery, structures. There is no distinction between the material and the spiritual. This is a time when as Whole the world was sacred, multiple and unique. Everything is connected by "holy strings" that are broken or consolidated by searching and asking universal harmony to the All. The sacred remains unchanged, only the rules governing it change. This assertion is confirmed by the part about the first age of prehistory Mailla told in the Popol Vuh. Throughout the story, the gods change, social norms evolve; techniques are transformed but everything remains sacred.

If we had the chance to watch one of these statuettes with the eyes of a Chontal Indian we would realize that this is not a statue but the soul, in its entirety, of this disappeared world.

Ultimately, it is certainly through the instinctive emotional intensity that we perceive in contact with these statuettes that we can actually understand this extraordinary dimension. This is an invitation to rediscover the "magical" dimension of our existence.

It is interesting to note that there are no barriers that would prohibit that the rules established by modern sciences are, in fact, the universal rules of these "holy strings" for the functioning of this ancient world. The rediscovery of the sacred that allow us to live in harmony with the All is the major challenge of the coming decades.

Carlo Gay worked as an engineer and geologist for Schlumberger. Schlumberger Limited is a multinational company providing oil services and equipment. In the 1950s, he was sent to exploration in the state of Guerrero in Mexico. During explorations in the Sierra Madre del Sur region, Carlo Gay discovers a series of high statuettes from ten to twenty centimeters. This is the beginning of a passion that will take him to write two books that are the references on the subject:

The book Chontal - Ancient Stone Sculpture from Mexico Guerrero will be provided with this statuette.