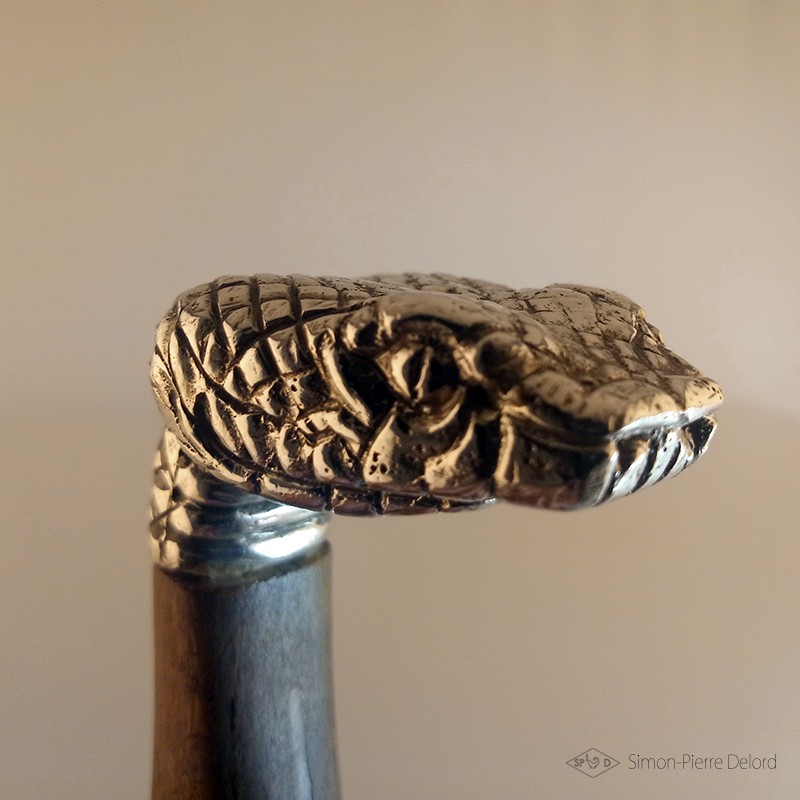 High Jewelry Knife. Jewelery creation entitled "Primordial Reptile". The Argentium pommel represents the head of a snake. The miter is adorned with a landscape representing the primordial earth. This landscape is composed of Australian Opals, Lapis Lazuli and Coral. The sharp blade represents the body of the serpent. This piece is unique.

This object was born out of a reflection on the very special place occupied by the snake in the different cultures around the world. The association between the animal and the knife makes it possible to materialize the duality between the fear and the fascination it inspires. The sculpture on the miter represents a landscape of the primordial earth.

Most of the great goddesses of nature, Isis, Cybele, Demeter or even Athena have the serpent as an attribute. Man's fascination with reptiles seems to have originated from the dawn of time. One might think that this fascination comes mainly from its ability, despite its small size, to bring a man to the ground, but it is also very widely associated with knowledge and divination.

The pommel and miter were first carved in wax. These pieces are made in Argentium using the lost wax casting technique.

We carry out in our premises the sculpture, the foundry, the setting as well as the polishing

The uraeus, or naja serpent (king cobra), erect and bearing the sun disk is the emblem of Isis. It is frequently represented on monuments but it is especially present on the headdress of the pharaohs. This emblem symbolizes sovereignty, knowledge and eternity.

In South America, among the Indians, running a hand over the colored skin of a snake produces beautiful designs or beautiful embroidery. We find this among Mexican embroiderers. (CHGH)

In Indian tradition, the snake is the symbol of knowledge. It houses the souls of the deceased.

In India, in the 17th century, snakes were loaded onto boats. They had an augural role. If they were "sad," we didn't venture out to sea.

In ancient Prussia, the family where a reptile chose to reside was considered protected from the heavens, free from poverty and misfortune.

In Greek mythology, the reptile is associated with the gift of prophecy. "Cassandra and Tiresias obtained the divinatory faculty through the effect of their relationship with the serpent, which was symbolized later by the python and the pythoness considered to be the depositaries of all the oracles of wisdom" (GUBE)

In the East, Opal is associated with hope. It protects against evil and places it under divine protection. "Brahma gave him his heavenly blue glow, Vishnu the glow of the sun and Shiva his blazing red" (NIMO)

A Chaldean divination taken up by the Greeks is called ophiomancy. It consists in analyzing the movements of the reptile to deduce omens. "We had so much faith in these oracles that we fed snakes on purpose to know the future" (COLL)

According to the astronomer and geographer Ptolemy (died in the 2nd century), a snake can be chased away by presenting it with a copper tablet on which two snakes are engraved, pronouncing the following words: "Ligo serpentes per hanc, imaginem, ut homini bothering; nec quemquam impediant nec diutus, ubis sepulta fuerit permanence ”(GAFC)

GAFF: M. J. GAFFAREL, Unbelievable curiosities about the talismanic sculpture of the Persians. Horoscope of the patriarchs and reading of the estoilles, s.l., s.n., 1650

COLL: Jacques-Albin-Simon COLLIN DE PLANCY, Dictionnaire infernal, or universal library, on beings, characters, books, facts and things which relate to apparitions, to magic, to the commerce of hell, to divinations, in the secret sciences, Paris, H. Plon, 1863