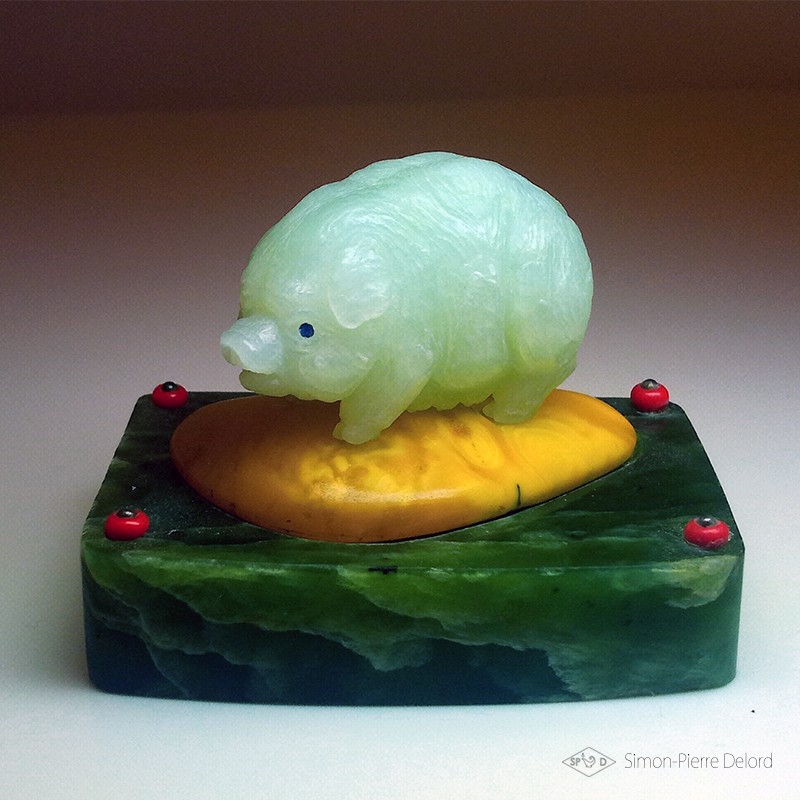 Object of High Jewelry. Jewelry creation entitled "Abundance". The pig was carved by our lapidary in a stabilized jade from China. The intermediate support is in yellow amber. The main support was cut from a nephrite jade from Siberia in Russia. The pig symbolizes abundance, its material the nobility of soul and power. Amber represents serenity and tranquility. This piece is unique. It was made by our lapidary craftsman and glyptician in our workshop

Delivered with a glass bell with its wooden support

The sculpture is in stabilized Jade

The weight of the Pig is 158 Carats

The material is yellow amber

The weight of the intermediate support is 38 Carats

The base is in nephrite jade from Siberia to Russia

Each fine stone is shaped and engraved by our talented lapidary craftsman and glyptician. They are carved by hand using diamond tools. This work is done in our workshop in the medieval village of Cordes-sur-Ciel in the Tarn

In Chinese astrology, the pig is a blessed sign. The word "Tchou" (pig) keeps evil spirits away. Throughout the Far East, many pig-shaped amulets are made. They are lucky charms symbol of abundance.

Among the Egyptians, the female pig is a symbol of fertility. It represents Nut. Nut is a beneficial goddess installed in the sky. She is the mother of the stars. Women made offerings to her to make sure they would had many children.

The Celts also respected the pig. According to legend, it was introduced by fairies. He accompanied the Druids. The legendary Merlin the Enchanter, from Arthurian legend and medieval Welsh poetry, himself had a piglet as a faithful companion.

In Asia, Jade is the stone of soul nobility and power. Especially in China, he embodies the five cardinal virtues: charity, modesty, courage, justice and wisdom.

"The very symbol of the Yang, it is endowed with solar, imperial, indestructible qualities" (CHGH)
"It serves as a channel for the celestial and terrestrial influences of the Yang and the Ying" (MARQ)

Since ancient times, the Imperial seal has been in Jade. The stone symbolizes royal function and the "Celestial Mandate"

"According to the rules of the Han dynasty, the princes and lords were buried with their clothes decorated with pearls and with Jade cases intended to preserve their bodies" Treaty of T'ao Hung-Ching, V th century

We find similar beliefs in Central America where it symbolizes the soul, the spirit and the heart of the nucleus of being. (CHGH)

It is attributed all over the world with medicinal properties.

In the Etruscans the Amber symbolizes the cosmic link. This gem attested, in the eyes of these people to the existence of a life after death (PARK). The Amber represented the psychic thread connecting individual energy to cosmic energy, the link between the individual soul and the universal soul (CHGH)

On the Gallo-Roman site of Locmariaquer in Morbillan we discovered pierced pig teeth from bracelets and / or necklaces. Indeed, at the time, the canines of this omnivorous mammal were considered to have a strong protective power

In the northeast of the Italian peninsula, a pig is painted on the door of the house to protect from night vision and nightmares (CHGH)

In Greek Mythology, Prince Troyen, Aeneas reaches the coasts of the Latinum. Arrived, it was the presence of a female pig accompanied by her thirty cubs which indicated to him the place where to erect his camp. He founded the city of Lavinium there