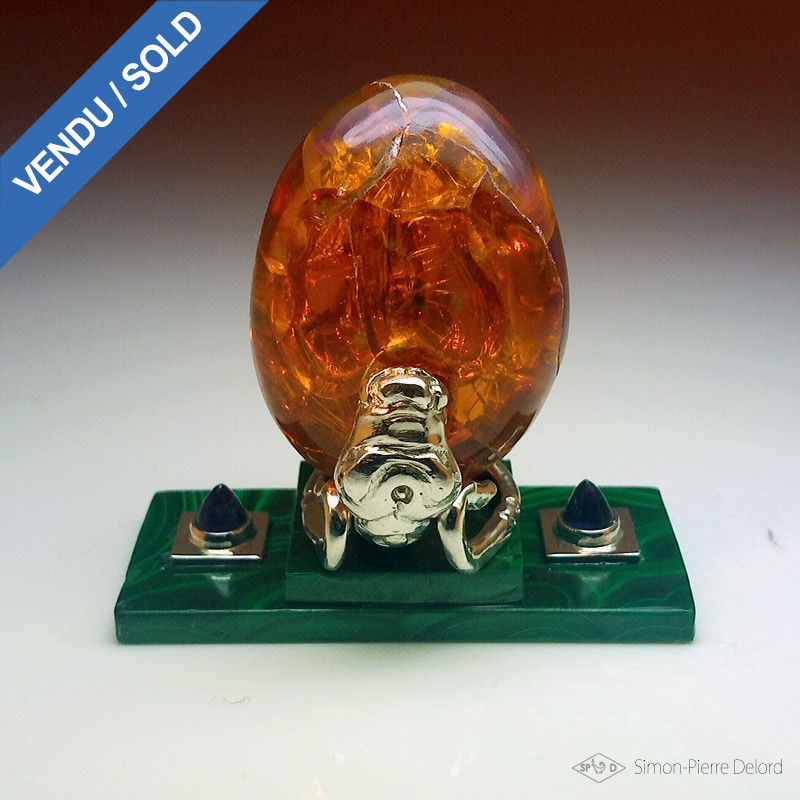 Object of High Jewelry. Jewelry creation called "Dragon Egg". The egg is carved from a raw Ethiopian opal. The support is made of two malachite plates. The set is framed by two polished amethysts. The Argentium structure represents a dragon's head. It surrounds the egg. The shaping and cutting of the stones was also carried out by our lapidary craftsman and glyptician in our workshop

Each fine stone is shaped and cut by our talented lapidary craftsman and glyptician. They are carved by hand using diamond tools.

We carry out in our workshop sculpture, foundry, gem setting as well as polishing

In the Greco-Roman world, Opal is a powerful lucky charm. It decorated the sticks of the Roman generals. We can cite the case of Nonius, a wealthy senator who owned a hazelnut-sized opal. Marc-Antoine having seen the beauty of the gem wanted to offer it to Cleopatra. Nonius preferred exile. (CHGH)

In the East, the Opal is associated with hope. It shelters from evil and places it under divine protection. "Brahma gave it its celestial blue radiance, Vishnu the radiance of the sun and Shiva its flamboyant red" (NIMO)

In the structure of all cosmogonies, the egg plays "the role of a cliché image of the whole" (citation de Mircea Eliade)

In China, the Dragon represents the creative heavenly power. It is the symbol of the emperor. It symbolizes the royal functions and the rhythms of life which guarantee order and prosperity. The pearl associated with it represents the perfection of speech, thought and orders of the emperor. The Dragon manifests its celestial activity by rain and thunder.

In Alchemy, the dragon is the symbol of the philosopher's mercury. "When the fixed sulfur has changed the mercury into its own nature, two dragons make way for the door of the garden of the Hesperides, where you can pick the Golden apples without fear" (PERN)

In Astrology, we find the axis of dragons which is also called "axis of destiny". The head of the Dragon indicates the place of the theme where the focus of conscious existence is to be built. At its opposite is the tail of the dragon which brews the influences of the past which must be overcome. (CHGH)

"When the drought rages, we make an image of the Dragon Yin and it starts to rain" (GRAN)